Opportunities in
an evolving market

In a first and superficial approach to the main market indicators, and in line with some publications, we can have feeling of witnessing the twilight of one the most innovative pharmaceutical forms in the industry, however, there are still several business opportunities for those who know how to identify them.

My objective for this article is to introduce the reader to these opportunities through the analysis of global and regional trends in the transdermal market, from the beginning, and with a focus on the last decade.

The first product to be launched to the market was a patch with reservoir technology programmed to release 1.5 mg of Scpolamine within three days (Transderm Scop®; Novartis Consumer Health). The product was launched in 1979 in the United States, and its therapeutic indication was the prevention of nausea and vomiting caused by motion sickness.

Forty years after its launch, and despite the fact that this technology has made great advances, Scopolamine patches not only continue to be present on the market, but they still hold the title of remaining within the top ten of best selling molecules in this pharmaceutical form.

It is important to mention that the APIs (Active Pharmaceutical Ingredient) that can be administered transdermally are limited, essentially due to a variety of technical complexities. For this reason, and considering the growing number of inexperienced players entering the industry as I will detail later, it is crucial to make partnerships with companies with a long history in transdermals if you want to access this niche, since they will substantially improve the chances of being successful.

From that first launch to the present, about 20 molecules have been approved by the FDA to be administered systemically by the transdermal route, achieving the boom of this pharmaceutical form with respect to the number of launches, towards the mid-2000s. A detailed list of innovative products approved by the FDA is listed below: 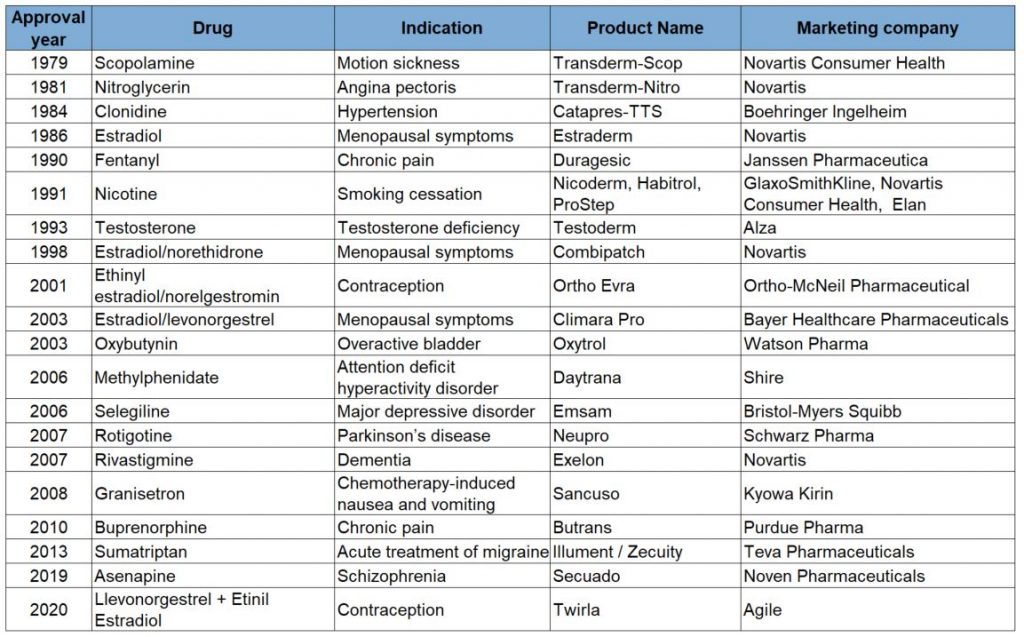 On below chart it can be perceived that, according to the behavior of its main variables, the global transdermal market could be entering its maturity stage, given the drop in the turnover along with a less pronounced decline in the volume of sold units: 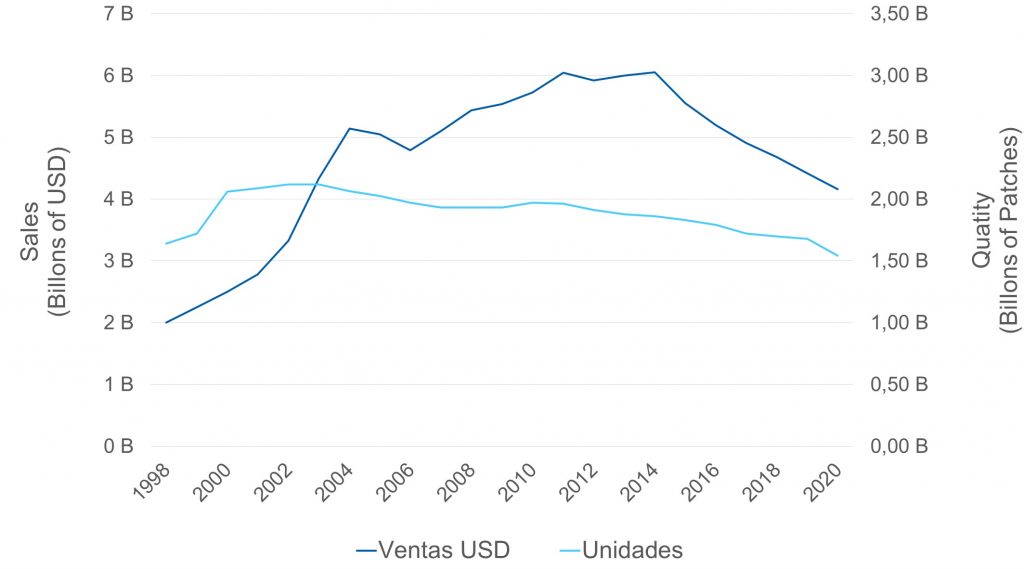 It stands out in this comprehensive view, a first decline in billing between 2005 and 2006, which was motivated by the entry of generic Fentanyl patches. Then the sales continued to rise until reaching its peak in 2014 exceeding USD 6B, promoted by the historical highs of both the Estradiol patch and the Exelon® (Rivastigmine patch).

Since then, a systematic decrease in both turnover and volume has been observed, which was mainly justified in two aspects:

In 2020, the global market is still above USD 4 B in turnover, despite having the lowest sales volume in the last 20 years.

With the Fentanyl market stabilized and driven by new product launches, it is expected to recover the level of global sales in term of volume and resume its moderate but steady rise in the coming years.

In terms of turnover, and given decelerating decrease, I foresee a stabilization around 4.5 – 5 million dollars, offsetting the upside effects of the aforementioned launches, with the appearance of new generics for established products (Eg: Neupro ®, Rotigotine patch, one of Amarin’s advanced developments).

I will now carry out a brief analysis considering the classification developed by EphMRA (European Pharmaceutical Market Research Association), where products are grouped by anatomical site of action, indication, mechanism of action or composition.

It is observed that the patches currently sold into the market concentrate more than half of the sales in the central nervous system (CNS), among which the following subcategories stand out: 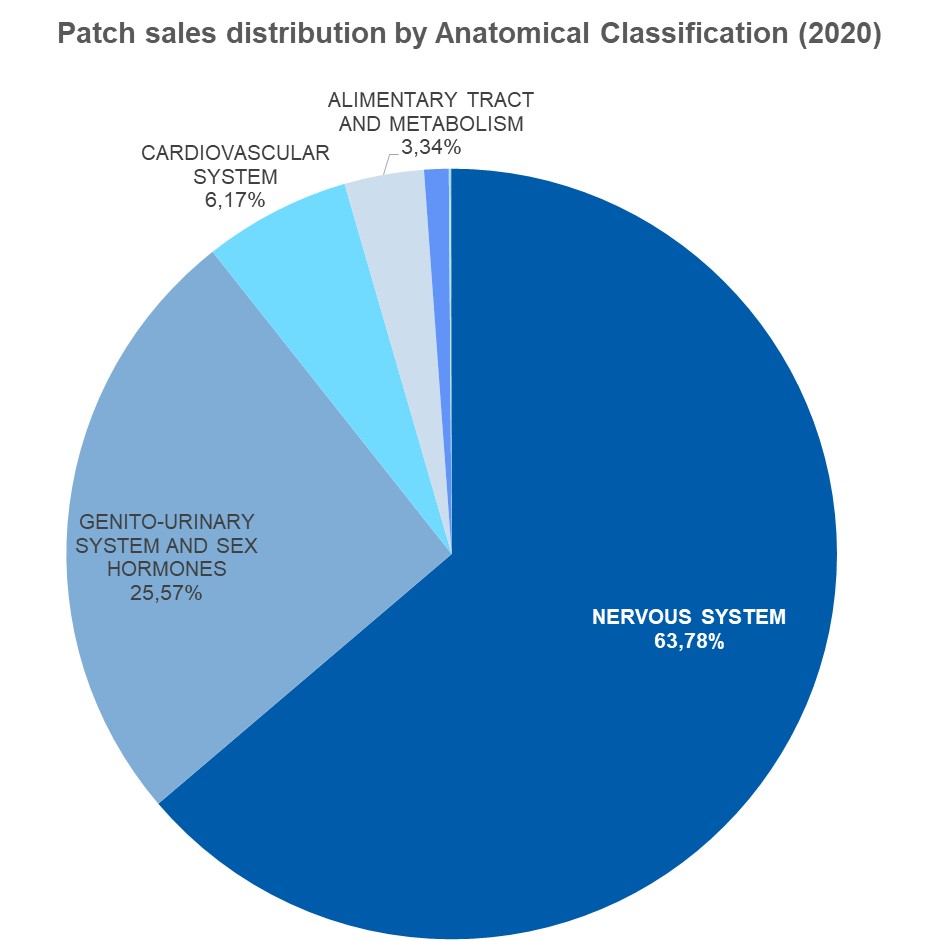 There are two other categories complementing the participation in sales, one that has grown in the recent years which is the hormonal products, mainly driven by contraceptive patches which have doubled their turnover, being close to USD 500M. With the opposite behavior it is the category of cardiovascular products, which it had shrank to a third of its turnover from 2010 to the present, not only in nominal terms but also reduced its sales in units to less than half, which evidence the emergence of new drugs or alternative therapies.

Players in the market

In a brief look at the players participating in this market, it is noticeable how, probably motivated by the growth that the niche had at the beginning of the millennium, various competitors have entered (mainly in the generics segment), pursuing a space of low competition and high growth. Being able to observe that the number of companies that have this pharmaceutical form among their offer grew by 61% in the last decade, while consequently the amount of products available in the market raised 72%. 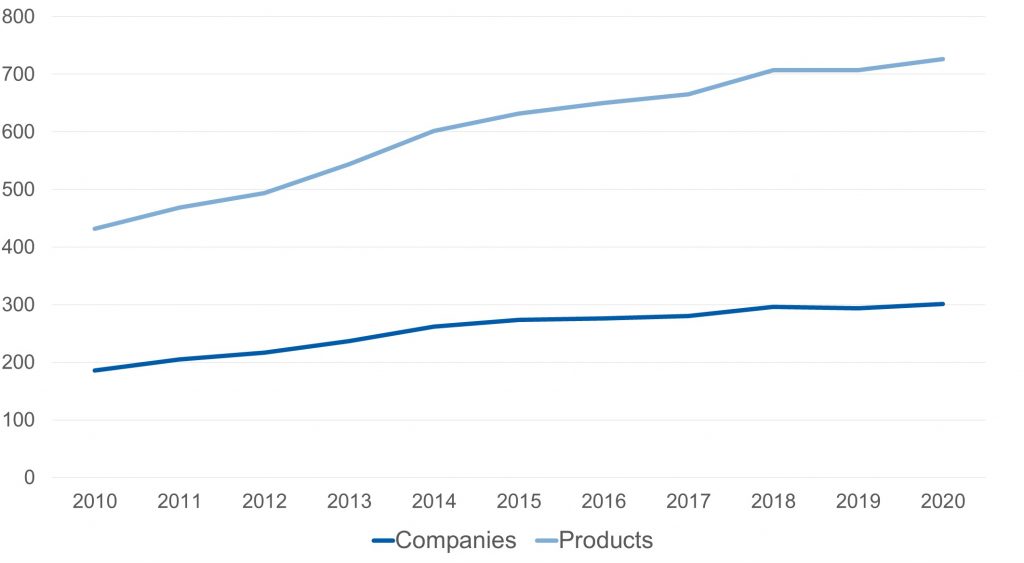 Let’s start then by understanding how the main variables of the transdermal market (turnover and volume) are currently distributed by regions: 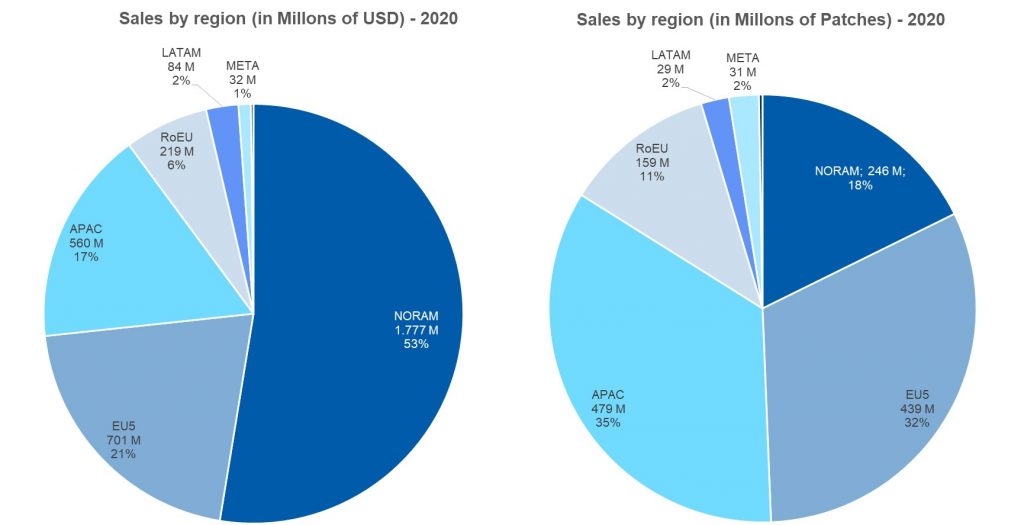 It is important to clarify that, when approaching to this focused assessment with special emphasis on regional economies excluding the main markets (US, USA and Japan), it should be taken into account that the figures measured in foreign currency will be affected by the fluctuations in the various local currencies. In the specific case of LATAM, in the last decade there have been multiple devaluations of currencies compared to the US dollar (Chile 46%, Mexico 56%, Colombia 85%, Brazil 196% and Argentina 2400%), a factor that it has to be consider when addressing sums in dollars.

You will find below a graph with the main variables for the sales of systemic transdermal products in Latin America: 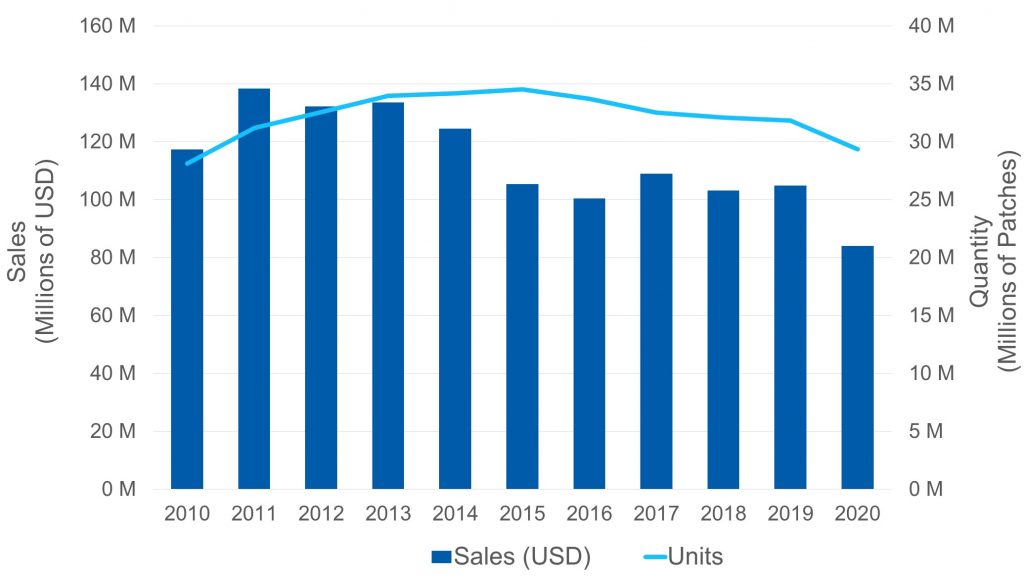 There is an indisputable correlation between the aforementioned depreciation of loca curencies against the dollar and the fall in sales of transdermal products, this shows that there is a certain elasticity of demand, since in the face of an inevitable increase in the price of the products (due to the fact that their costs are entirely in foreign currency) the market opts for lower value substitutes that may have a similar therapeutic action despite not offering the multiple advantages that patches can provide.

On a deeper evaluation, it can be seen that of: out the eight molecules present in patches in Latam, two of them have reduced their sales in the last decade: Estradiol and Nitroglycerin, being long-term products on the market that were replaced by new therapies. While the rest of the APIs have managed, on average, to expand sales by 25% in terms of volume.

Leaving apart some rare exceptions, it takes a long time for transdermal products to reach regional markets from the date of first launch into the world, being relegated to their priorities by multinationals; in part because it has a marginal participation compared to the large territories, and also because the relationship: costs for obtaining records versus expected cash flow, may not be attractive in all cases. Thus, we see how there are certain countries with an absolute absence of generics in some molecules (Ex: Fentanyl in Brazil)

This is the case of both, large corporations dedicated to the market of innovative products as well as the ones in the generic business, which allows local or regional players, with a vast knowledge of the particularities of each market, to appropriate that space and expand its product offering in a still limited expanded market.

Regarding the evolution of the level of competition, we previously saw that at the global scale, there has been a substantial increase not only in the quantity of companies in the niche as well as on the number of available products, however this is not replicated in the regional perspective, where both variables remained stable. In fact, Amarin is still the only company in the region with capabilities to develop and produce prescriptive patches.

In view of the above, and looking into the future, a greater penetration of generics is expected in the coming years from companies focused on Latin America. Amarin will be one of the main interpreters of this evolution since it has made regional out-licensing agreements for the following molecules: Rivastigmine, Buprenorphine and Fentanyl, with a significant expansion of sales projections.

Probably a superficial approximation to the first figures can show us an industry in contraction (22% in volume and 27% in turnover in the last 10 years), however, it is interesting to do a final review of these two indicators but excluding the Fentanyl patch. Which, as we saw, has suffered the greatest retraction over time and still easily holds the title of the best-selling patch in the history of this market niche, which can distort the analysis. 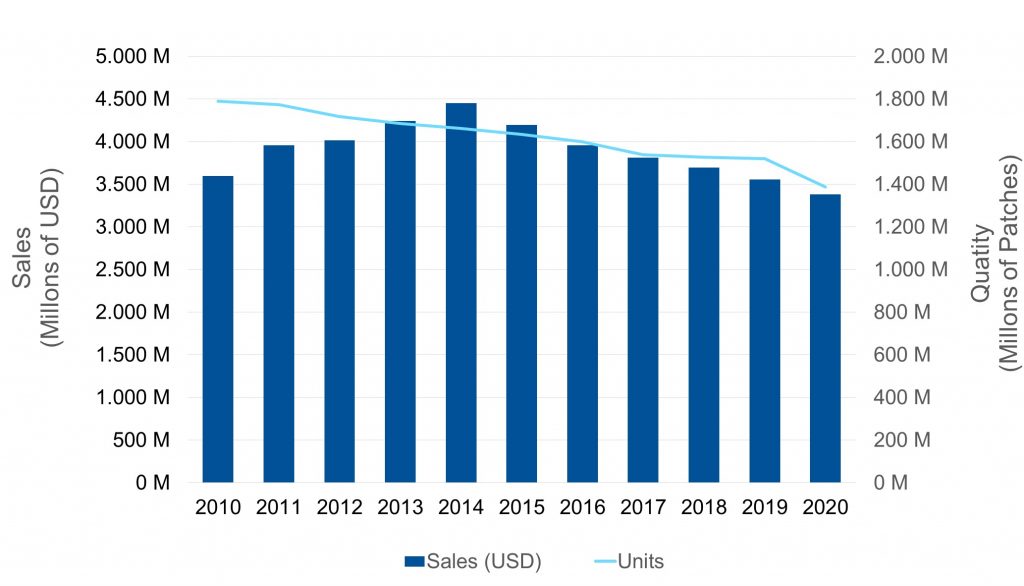 The reduction in turnover is only 6% while the volume decrease remains unchanged (22%) for the same period (2020 vs 2010). It is evident that from this point of view, patches have evolved into more sophisticated products that, due to their technology and added value, are marketed at increasing unit values. This reinforces the idea that it is a highly complex market niche on the development aspects, where the chances to compete are reserved almost exclusively for the experts in this type of pharmaceutical form.

Another point that emerges from this analysis, and I am interested in highlight, is that only 8 of all the molecules available in patches have managed to establish themselves with significant sales in most of the regions of the world. There might be multiple approaches to understand it (acceptance of the pharmaceutical form, lack of experienced manufacturers, limited markets that are not a priority for large competitors, among others), but the most relevant without a doubt is the enormous possibility that exists for those companies that can find a way to take the products established in the main markets to the rest of the world.

On the other hand, if we involve the demographic changes that have been proliferating since the middle of the 20th century, as the serious aging of the population, together with the fact that the patches are used mostly by the elderly population (mainly applied to the CNS as we have seen), It is obvious to foresee that demand will continue to rise constantly as long as these vectors remain unchanged.

Finally, and despite not being the object of this study, it seems important to mention that the regulations in reference to the requirements for the approval of transdermal patches have drastically become more complex in the last decade, which has logically increased the costs necessary to place a TDS into the market.

Considering then the regulatory variable, and its associated cost growth, in combination with the technical complexity of developing a transdermal product, it would have been expected that the number of companies interested in this market segment would have decreased. However, as we observed, this did not happen, but on the contrary, it went in the opposite direction, justifying the potential that this niche still has.

We will then see what happens to the industry in the coming years, but in my opinion there is a great opportunity for competitors who can assert their experience and trajectory in the pharmaceutical form that requires a higher degree of craftsmanship and expertise.

“Transdermal patches: history, development and pharmacology” – British Journal of Pharmacology 18/12/2014
Figures has been based on IQVIA information
“Should You Bet On Transdermal Drug Delivery?” Peter Cohan – Forbes 21/01/2019