The Latin American surveillance health authorities have made progress year after year with respect to the requirements of product registration in general, seeking the best balance between the safety of its inhabitants, the efficacy of the products and the economic reality of each country.

Thus, countries such as Mexico and Brazil (the largest economies in LatAm) are at the forefront with respect to regulatory requirements for registration of synthetic products.

ANVISA is the one which has taken a step beyond the rest of the countries, becoming in 2016 a member of the International Council for Harmonization.

Additionally, on April 1, 2020, there was published the new regulations regarding APIs (active pharmaceutical ingredient). Through the process defined in this regulation, ANVISA issues a certificate called CADIFA (Carta de Adequabilidade do Dossiê de Insumo Farmacêutico Ativo), equivalent to the European CEP.

These two actions represented a complete review of the regulatory scenario in Brazil.

Current reality of the regulatory requirements for the registration of Transdermal Administration Systems in Latin America.

The evolution of regulatory requirements has also encompassed the registration of generic transdermal systems. Furthermore, this process has always represented a challenge for the applicants and for the health authorities, mainly due to the lack of knowledge of this pharmaceutical form by the authority, considering the low volume of relevant applications.

One of the key points that always brings up discussions is the drug content of the product that is subject to registration, since in the case of bioequivalent products, in other words products that release the same amount of drug per unit of time, it does not necessarily have the same drug content. In fact, a hallmark of most of the patches developed by Amarin is their higher efficiency (matching the release profile of the original product with a lower total drug load).

It is very important to make the submission with the appropriate focus and clarity to ensure that the health authorities evaluate the documentation correctly, since the point explained above is one of the characteristics that differentiates this pharmaceutical form from the others.

As we said previously, Brazil and Mexico have followed more closely the progress of the regulations of the countries with high sanitary surveillance.

Thus, in the case of registration of transdermal systems, the following regulations have been issued:

– Cofepris (Mexico): study guide to establish the interchangeability of generic drugs in the presentation of transdermal patches with systemic action. 2015 (binding).

They have direct reference to the Guideline on Quality of Transdermal Patches of the European Medicines Agency, Committee for Medicinal Products for Human Use (CHMP).

Although some other Latin American authorities have accompanied the evolution of the regulatory requirements of countries with high sanitary surveillance, in general, today there are still opportunities to submit generic products in some countries with lower regulatory barriers.

Making a survey of the transdermal systems found in the market of the 4 Latin American countries with the highest GDP, it can be seen that most of them are original products, not being a significant amount of generic registrations:

This indirectly demonstrates the challenge of applying for a generic transdermal system registration.

In the following table, the approval requirements are compared, based on the CTD structure for the two most important modules in the registration of generic products, (Module 3 -Quality-, and Module 5-CTD Clinical Study Report -), for the 4 largest economies in Latin America. 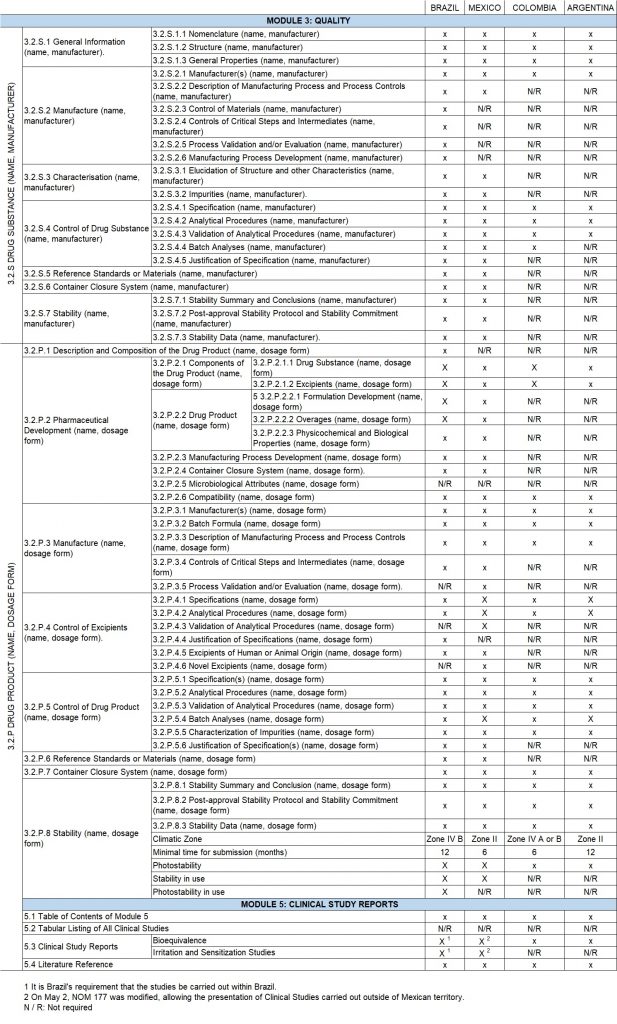 Both Brazil and Mexico, the largest economies in Latin America, have advanced in the regulatory requirements for the registration of transdermal systems. Being Brazil the country that has raised the standards for such registration, even requesting a certificate for the evaluation of the APIs, consequently approaching the requirements to United States and Europe.

The registration of generic transdermal systems is a challenge that must be addressed taking into account the business possibilities within these countries. For this reason, nations must balance the requirement of their regulations with the potential size of the market, to ensure at the same time that they have adequate standards and allow the entry of generic products that may offer a cheaper alternative for the patient and the health systems.

Based on the foregoing, it is clear that there are still opportunities to register generic synthetic products in countries that have not yet updated their regulations.