The filed patent describes the product as follows: “A drug delivery device for percutaneously administering a drug comprising a plurality of projections, a drug reservoir containing a drug, and where the projections extend from the reservoir and are adapted for penetrating the stratum corneum for percutaneously administering a drug from the reservoir to produce a local or systemic physiological or pharmacological effect.” Alza Corporation, the company that invented and introduced the first transdermal patches, Scopolamine Transderm Scop, to the American market.

The administration of drugs using the microneedle device allows the drug to avoid the stratum corneum barrier and reach the deepest and most permeable areas of the epidermis. Likewise, this penetration is well limited and it avoids reaching the innervated territories, avoiding the pain that would be caused by a subcutaneous injection. The advantages of this technology are rapid action, better patient compliance, self-administration, high permeability, and efficacy. In addition, microneedling provides high-precision, reproducible results with minimal inter-subject variability in bioavailability. Although it has many advantages, it also has some limitations. There is a possibility of skin irritation or allergy of sensitive skin. Since the size of the needle is very small, the tips of the microneedles can break and if they remain inside the skin, they can cause problems.

The microneedles vary in length up to 1500 microns (1.5 mm) and do not exceed 30 microns in diameter depending on the area of ​​the body where they will be applied.

Microneedles are divided into five types based on different drug delivery mechanisms: 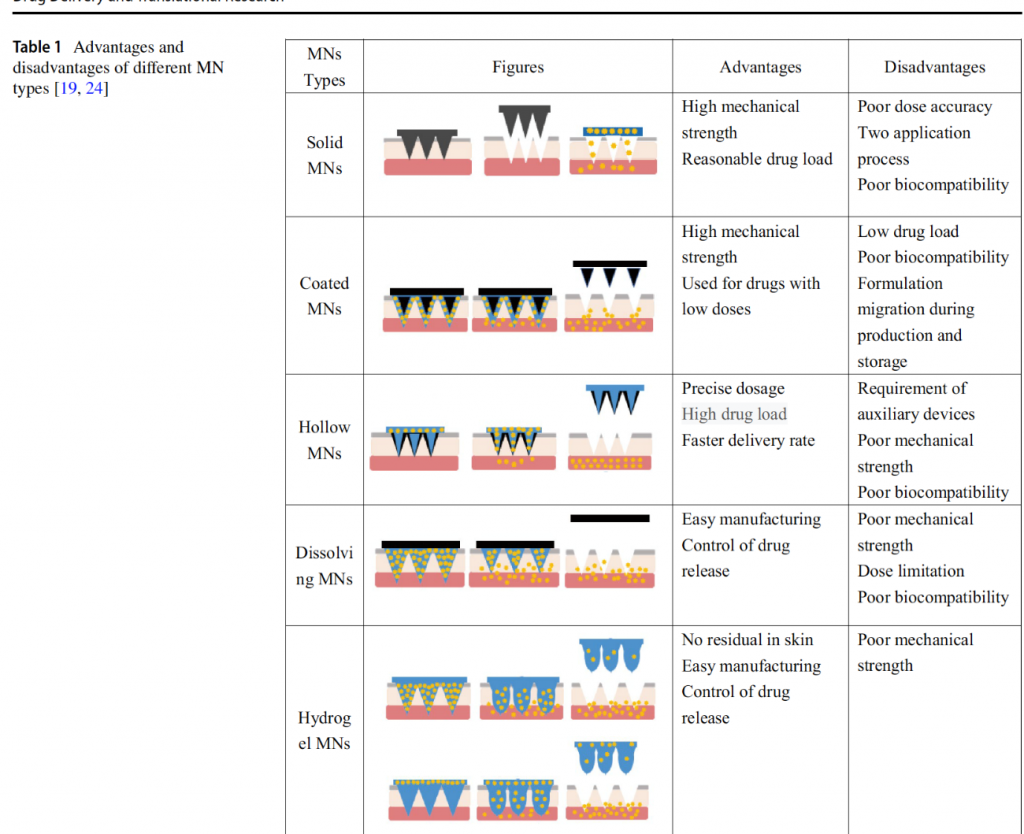 Solid microneedles are mainly used for skin pretreatment by pore formation. The pointed tips of the needles penetrate the skin; creating small channels, through which the drug enters directly into the skin layers when applying a drug patch, thereby increasing transdermal permeation

They are solid microneedles whose surface is covered by a matrix that contains the drug in solution or suspension. When introduced into the skin, the drug molecules are transferred to the surrounding skin in a similar way to what happens with a classic transdermal but without the resistance offered by the stratum corneum.

Dissolution microneedles are made from biodegradable polymers by encapsulating the drug in the polymer. After inserting the microneedle into the skin, the dissolution that releases the drug is produced.

The microneedle should not be withdrawn after insertion as in other cases the polymer degrades within the skin.

The bioacceptability and dissolution of the polymer within the skin make it one of the best options for long-term therapy with better patient compliance.

Hollow microneedles have an empty space or reservoir inside with a hole that connects it to the external environment. A solution of the active ingredient is placed in the reservoir

When inserted into the skin, the drug is deposited directly in the epidermis or the upper layer of the dermis. It is mainly used for high molecular weight compounds such as proteins, vaccines and oligonucleotides. These microneedles are capable of delivering large doses of drug since more drug can be accommodated in the empty space inside the needle.

This type of microneedle has been developed recently. Superswellable polymers are used to make microneedles. Polymers constitute the hydrophilic structure that makes them capable of absorbing a large amount of water in their three-dimensional polymeric network. These polymers swell when inserted into the skin due to the presence of interstitial fluid. This leads to the formation of channels between the capillary circulation and the drug patch. Before needling, these microneedles are only used to break the skin barrier. As they swell, they behave like a membrane that controls speed.

Based on the foregoing, it can be affirmed that microneedles are very appropriate systems for the painless release of drugs and with high bioavailability. However, despite the relatively long time that has elapsed since the appearance of the first invention patent in this field, there are no drugs available with this administration system. This apparent phenomenon is attributed by some authors to the technological difficulties for production. If they are available and authorized by offices such as the FDA for their direct use, instruments for non-medical treatments but cosmetics, the so-called microneedling that produce, with the use of microneedles, small perforations in the skin causing a positive cosmetic reaction.

In recent years, the interest in these systems has grown markedly judging by the profusion of publications on the subject and the initiation of clinical work studying the efficacy for the administration of relatively high molecular weight active ingredients such as insulin or for immunotherapy.