According to the WHO, dementia is a syndrome characterized by deterioration of cognitive function beyond what might be considered a consequence of normal aging. Dementia affects memory, thinking, orientation, comprehension, calculation, learning ability, language, and judgment. Meanwhile, consciousness is not affected.

Impairment of cognitive function is often accompanied and sometimes preceded, by impairment of emotional control, social behavior, or motivation.

Considering that dementia is one of the leading causes of disability and dependence among older people worldwide, it can be overwhelming not only for those who suffer from it but also for their caregivers and family members. There is often a lack of awareness and understanding of dementia. This can cause stigmatization and pose a barrier to people seeking diagnostic and care services on time. The impact of dementia on caregivers, family, and society can be physical, psychological, social, and economic.

The forms of dementia are multiple and diverse, with the most common types being so-called neurodegenerative diseases. In these conditions brain, cells stop functioning or die. These include

About 50 million people worldwide were affected by dementia in 2020, about 60% of whom live in low- and middle-income countries. About 10 million new cases are reported each year, implying a new case every 3.2 seconds. The total number of people with dementia is expected to reach 82 million by 2030 and 152 million by 2050. It is estimated that between 5% and 8% of the general population aged 60 years or older suffer from dementia at any given time.

As already indicated, a significant portion of this increase can be attributed to the fact that in low- and middle-income countries the number of people with dementia will tend to increase more and more. The  fastest growth of the elderly population is occurring in China, India, and Southeast Asian countries. It is estimated that the share of this segment will reach 71% of the total by 2050. 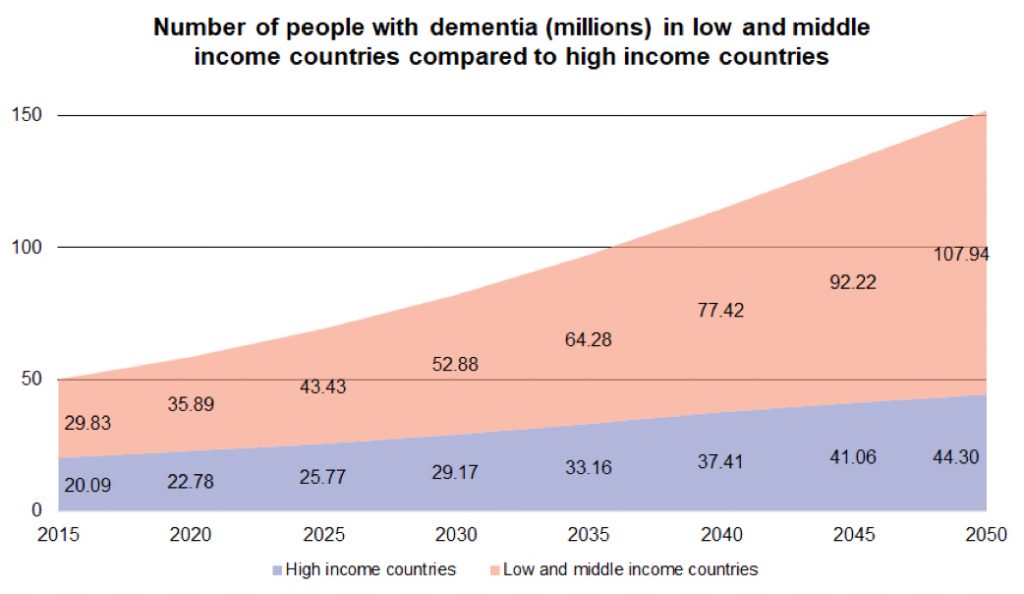 Currently, the population most affected are those over 65 years of age and, globally, 65% of the cases are women. However, there is growing awareness that the disease can begin 10 to 20 years before diagnosis.

So far, no treatment can cure dementia or reverse its progressive progression. However,  numerous interventions can be offered to support and improve the lives of people with dementia, their caregivers, and their families.

When it comes to medications, there are two types of alternatives to treat the symptoms of dementia. The first group is cholinesterase inhibitors. This group includes donepezil (Aricept®), rivastigmine (Exelon®), and galantamine (Razadyne®). These act by increasing the levels of a chemical messenger involved in memory and reasoning, and can help reduce or control cognitive and behavioral symptoms.

While, in more advanced stages of the disease, memantine (Namenda®) is prescribed, which acts by regulating glutamate activity and whose main effect is to reduce symptoms. This may allow some people to maintain certain daily functions for a little longer than without the drug.

The impact of generics and current world market distribution

It is important to note that the market for dementia drugs has undergone a process of generic penetration over the last decade. This has logically reduced the cost of access to this type of medicine, bringing the global invoicing from USD 8.5 MM in 2010 to about USD 2.8 MM in 2020.

At the regional level, the sharpest declines have occurred in the United States and Europe, where the global market fell from USD 6.843 million to USD 1.331 million for the same period. On the other hand, APAC (Asia-Pacific), the region that accounts for the majority of sales for these molecules worldwide (42% of the market in 2020), has only seen an invoicing contraction of 13% over the last decade.

As indicated above, this overall invoicing retraction is only due to the decline in unit selling price. The volume has increased steadily over the same period, reaching 44% more daily treatments in the last decade, as we can see in the following table. 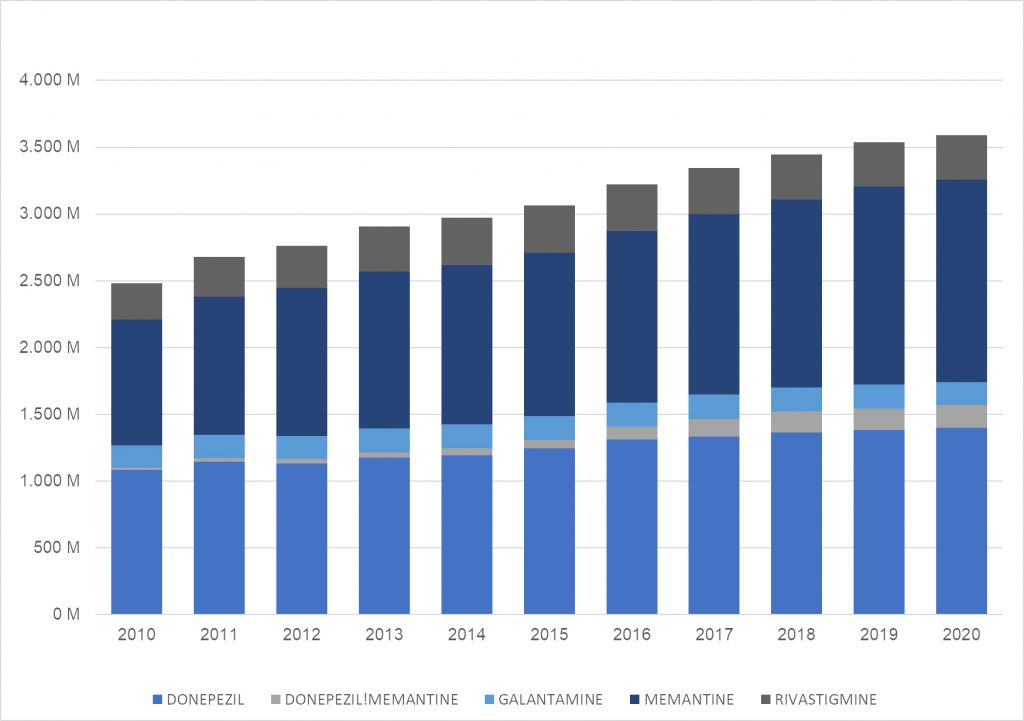 As regards the distribution of the world market by molecule, two drugs share almost equally 80% of the total volume of treatments: Donepezil and Memantine. Rivastigmine accounts for just under 10%. However, thanks to its competitive advantages (as it is the only one so far available in patches on the market), it accounts for 20% of the worldwide invoicing for the segment under evaluation. 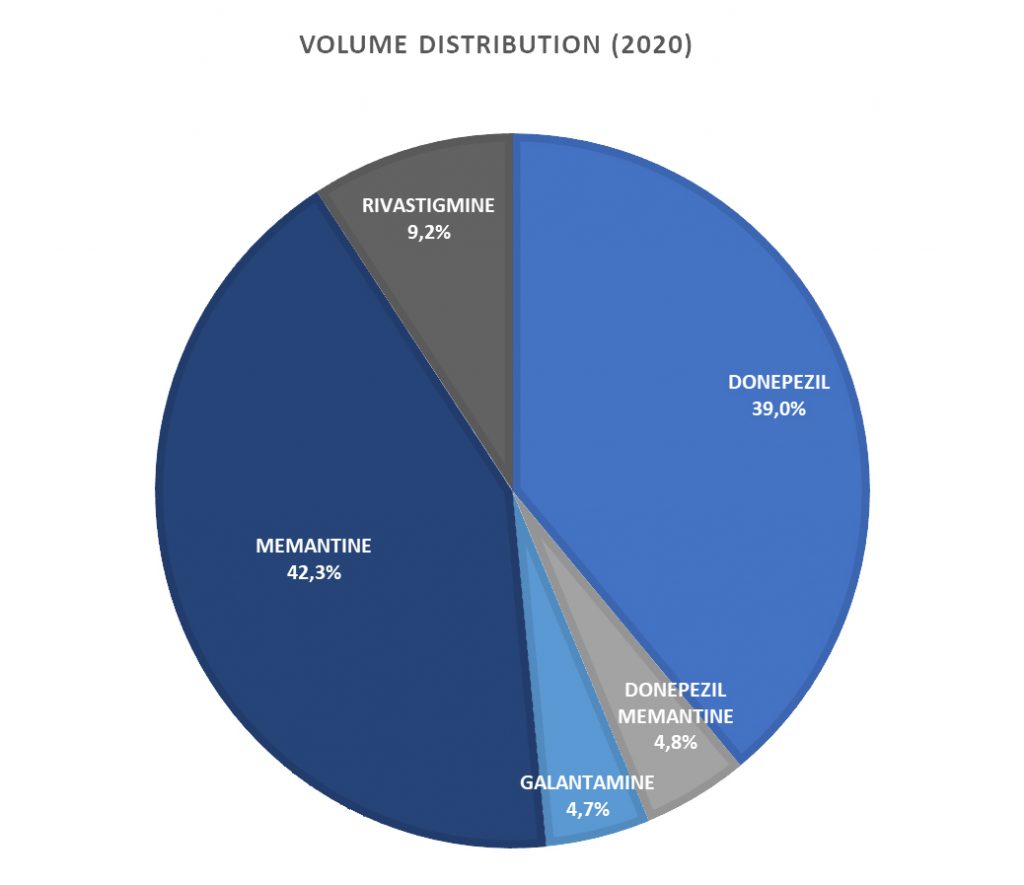 We can mention that some new developments have recently appeared in the drug market for the treatment of Alzheimer’s disease, which are listed below:

Aducanumab: in mid-2021, the FDA issued an “accelerated approval” for the only immune therapy or modifying drug that would address the underlying causes of the disease. As it would help reduce amyloid deposits in the brain, it could help slow the progression of Alzheimer’s disease.

However, this approval has generated great controversy in the scientific community. The European Medicines Agency (EMA) did not authorize the commercialization of aducanumab, because they consider that the benefit/risk ratio is negative.

Donepecilo Patch: in March 2022, the FDA approved Corium’s Adlarity® 7-day patch for the treatment of patients with mild, moderate or severe dementia of the Alzheimer’s type. The first donepezil patch approved worldwide (November 2021) was from Icure/Celltrion in South Korea. It is a 3-4 day patch branded as Donerion®.

Rivastigmine Multiday: in May 2020 Luye Pharma AG announced that its Rivastigmine multiday patch (Rivalif®) was under evaluation by the European Medicines Agency.

In conclusion, it is important to note that there are currently numerous projects in various stages of development. Among these, two monoclonal antibodies stand out: Donanemab (Eli Lilly) and Gantenerumab (Roche). However, it will be several years before an eventual market launch.

Development of generic patches for the treatment of dementia: a business opportunity

Global population growth and the steady increase in life expectancy mean that dementia will continue to be one of the most pressing global health issues.

The medical community and the pharmaceutical industry continue to search for the long-awaited development of a mechanism to cure dementia associated with Alzheimer’s disease. In the meantime, existing therapies that delay the progression of dementia and the onset of symptoms will maintain their relevance in allowing the patient to benefit from the treatment of Alzheimer’s disease.

Similarly, the current alternatives can continue to evolve into more complex pharmaceutical forms that provide benefits to both the patient and the families of affected individuals and their caregivers. This will be incentive enough to develop transdermal patches to achieve this goal.

In Amarin, you will find a professional partner with more than 30 years of experience. We have the know-how to make your transdermal project possible and a team with flexibility, transparency and commitment.